This is a short story I wrote for a Halloween contest. Thought I’d post it here for anyone’s viewing pleasure and to help gear you up for Halloween! 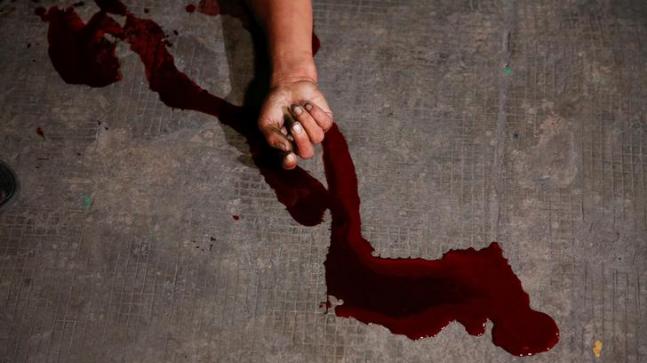 It was pitch black. Cory couldn’t see a thing. But she could smell the dirt,  feel the biting chill. She didn’t know where she was, only that it was cold.
Her clothes were gone. She wished that she could move, but ropes around her wrists and ankles kept her prostrate on the hard ground. A cloth was stuck in her mouth with duct tape over her lips. The last thing she remembered was a hooded shadow jumping out and jabbing a syringe in her neck. She had no idea how long she’d been out.
There were no sounds to indicate her abductor in the vicinity.
As if to contradict her thoughts, there came a sliding movement near her leg. Cory held still, not wanting to alert the other presence that she was awake. Suddenly, another movement came from the other side, this time brushing up against her hip.
She recoiled at the sensation of cool, reptilian skin brushing against hers. Cory hoped it wasn’t what she thought. A small hiss by her head confirmed the fear. Snakes were with her. Breathing rapidly through her nose, she closed her eyes and tried to stop trembling.
The snakes would be attracted to her body heat, but she hadn’t done anything to antagonize them, so they shouldn’t bite her. As long as she held perfectly still, they would simply absorb her body heat and leave her be… right?
A heavy, leathery sensation slithered over her bare stomach and Cory couldn’t keep herself from jerking. Snakes seemed to slide over her from every direction. She wasn’t sure how many were on her, but she felt their considerable weight on top of her chest and both arms. There had to be at least three gliding over her legs.
Tears leaked down the sides of her face and soft whimpers escaped her throat.
A sudden, sharp pain exploded in her right thigh. Acidic burning bloomed through her upper leg. She grunted through her gag. Another bite in the soft flesh of her upper arm made her scream, though it was muffled.
Then the biting was everywhere. Needle points of pain hit her on her toes, her chest, even her neck. Cory could feel her body start to swell as the venom worked its way into her system.

“Trish.” It was Detective Holdman’s voice.
Large, warm hands were on her shoulders, gently shaking her. Trish blinked, but everything looked blurry. The light was blinding after the vision she’d just experienced. Swaying her head from side to side, her eyes were able to focus on the blond man leaning over her, his brows drawn together with concern.
“Sna-“ Trish coughed before she could get her words out. Detective Holdman had a glass of water ready for her.
With trembling hands, she accepted the drink and sipped at it while glancing around the conference table. Valerie Clemmings, an FBI profiler, was studying her with interest while Holdman and Crandle sat on either side of Trish with silent support. They were used to Trish’s visions, as she’d been working for the local police department for five years now.
Taking a fortifying breath, Trish cleared her throat. “The latest victim was in some kind of pit with a bunch of snakes.”
Holdman grimaced and his blue eyes looked at her with sympathy. “Is she still alive?”
Licking her lips, Trish shook her head and rolled her office chair closer to the table. “I didn’t get much from the vision, except that she was tied up and stuck with those snakes. They had venom that caused a burning sensation as soon as their fangs made contact.” She took another sip as an excuse so she could keep her tone composed. “And the victim couldn’t see anything. No stars, no shadows, nothing.”
Everyone at the table seemed to mull over her words and were taking down notes.
Trish’s heart rate calmed as she waited. The visions were always so intense, so vivid. It was the only time she experienced such strong emotions. Sometimes it was hard to believe that she had been sitting in the fluorescently lit room at the police station that whole time.
Valerie broke the silence. “So, if Miss Pyper is correct with her vision-“
“She is,” both detectives said in unison.
Trish pulled some of her dark hair over her shoulder to hide a smile. The FBI agent could check the records for all the cases she’d helped close. The only one they hadn’t caught so far was the Ghost.
“Anyway,” Valerie waved a hand. “Her vision would prove that Cory Miller is another fatality of this serial killer.” The profiler picked up the missing person report on Cory Miller. “That would make ten victims that we know of.”
Detective Holdman glanced at Valerie. “And we’ve got nothing on our UNSUB.”
Frowning, Valerie shrugged. “I’m still working on it. All I can say now is the typical – we’re looking for a white male, age could be anywhere between twenty to forty. Obviously, this guy has some issues with brunettes with a similar build. My guess is that his mother has similar features.” Her eyes narrowed in thought. “I’m thinking this guy isn’t the average serial killer, though. There’s something I can’t seem to pinpoint.”
“I still say the UNSUB is a sexual predator,” said Crandle. He was sitting to the right of Trish, picking at his yellowed teeth, like he always did when craving a cigarette. “We can probably find him through those kinky chat rooms.”
Shaking her head, Valerie said, “I disagree. I don’t get any sexual vibes from these crime scenes.”
Frowning, Crandle flipped through some files until he found the one he was looking for. “What about this one? The victim was stabbed five times in her vagina.”
Closing her legs, Trish was glad no one could see her movement. The memory of that vision was still fresh. She continued to have nightmares about it even though the vision was months ago.
“No, I don’t think that was sexual.” When Crandle scoffed, the profiler explained. “My bet is that it has something to do with power. All of these murders are different. It seems to me that the UNSUB is… exploring different ways to kill a woman.”
Nodding, Holdman looked at the other man. “She’s right. If the victims didn’t all look similar, we probably wouldn’t even be able to link these killings.”
“Let’s move on.” Valerie pulled another folder from her briefcase. “This is the last missing persons case we’re going to have you look at tonight, Trish.” She pulled out a clear baggie holding a small wallet. “This was found in Debora Helstrome’s car. She was reported missing a week ago.”
Trish stared at the bag that Valerie pushed in front of her. The last vision had been more than unsettling. She wasn’t mentally prepared for another.
“We can push this off till tomorrow,” Holdman said, watching her.
Blowing out softly, Trish shook her head and pulled out the wallet. She felt the soft texture of leather between her fingers…

Debbie’s eyelids felt heavy. She didn’t want to open them, but knew there was something wrong. She needed to wake up. Forcing herself to open her eyes, she saw a single light bulb hanging from a string on the ceiling. It didn’t produce much illumination.
Debbie was lying on a bare mattress on the floor. Only wearing underwear, her skin felt a little sticky and it gave off a strange, sweet smell.
Through growing hysteria, her memory clicked into place. Kidnapped. Scanning the bare, windowless walls, she spotted a door with a removed doorknob. Getting up slowly, she walked over to inspect it. The place where the knob should have been was filled with cement.
Debbie tried to push it open, but it wouldn’t budge. The hinges were on the other side, and getting out looked impossible.
A sob escaped from her and the brunette stepped back. A sickly crunch echoed throughout the empty room as she felt something squish under her foot.
Debbie squealed and hopped onto her other foot. Glancing down, she saw the large brown spider that she’d killed. Realizing that the poor lighting didn’t allow her to see into the corners of the small space, she swallowed and moved closer to the light.
Rubbing her arms, her eyes watered with desperation.
Wiping away some tears to clear her vision, Debbie saw four large spiders crawling by her feet. Giving a small screech, she ran over to the mattress that was against the wall. When she felt little butterfly caresses on both her shoulders, she screamed and brushed the spiders off.
Turning to look at the wall she’d backed up against, she saw that it was covered with all different kinds of arachnids. The smallest was the size of a nickel and they varied in colors. They were pouring out of a vent from the ceiling.
Panic seized her. Small feet pattered over her ears and neck. Debbie frantically smacked at her face and ran over to the door, stepping on several spiders in the process.
She kicked and clawed at the door. “Please let me out! Please! I’ll do anything!”
Spiders were crawling up her legs now. Through her terror, she could feel some of them biting her. One spot on her neck particularly burned.
Never had Debbie thought she would die in such a terrible manner.