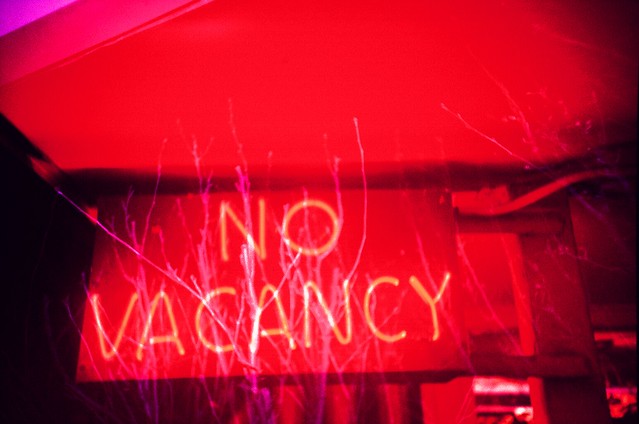 Enjoy this fun post! I grew up on the movie Psycho and totally agree that there’s a creepy element about hotels that movie-makers have exploited (much to everyone’s delight!).

What is it about a remote hotel setting that compounds the terror in a horror movie? Could it be those corridors, the length of 20 football fields that are seemingly the only avenue of escape from unspeakable horror, but always have a really unpleasant surprise lurking at each end? Is it those closed doors that lead off of a dimly lit hotel corridor behind which anything may be lurking? Fear of the unknown is part of the human condition and having movie characters battle monsters in unfamiliar surroundings adds disorientation to terror. These are not exclusively budget hotels as one might think: Horror haunts the most hallowed of halls.

The 1960’s film, Psycho is a horror classic and has all the elements that make terror so tantalisingly terrible. A young woman on the run after stealing $40,000 chooses to hide out at the isolated Bates Motel that sits vulture-like atop a craggy hill similar in setting to Dracula’s castle, and seeming to rely entirely on a sinister looking moon for lighting. To have someone else go where no sensible coward has gone before and then have our cowardice justified when they are horribly mutilated, somehow reaffirms our self-esteem. This lady gets exactly what this thoroughly creepy motel suggested she would.

The number 13 features in two of the scariest movie hotels and one would think that this alone would give reason enough for pause. The Dolphin Hotel, and in particular room 1408 (adds up to 13 as if Stephen King didn’t know and maliciously assign anyway), is the scene of unrestricted evil gone berserk. Again, a supposedly intelligent individual who is the author of 3 successful non-fiction works based on the paranormal, checks into this notoriously haunted room simply because he has a sudden attack of conscience: He doesn’t actually believe that the paranormal exists and therefore feels like a fraud. The terror of this hotel is that life goes on as normal in the rest of the establishment, while demonic chaos very loudly reigns in that room only. A similar scenario erupts at the Wessex Hotel in the movie, Nightmare on the 13th floor. Guests mysteriously disappear and a reporter who is writing a review takes it upon herself to investigate. The discovery of an unmarked 13th floor immediately kills any intelligence she possesses and she sallies forth unhindered by common sense or travel companions. Some Gothic decorative touches really should have given her some indication of the satanic cult that resides on this floor.

Isolation from the comfort of a crowd also turns The Overlook Hotel in the 1980 film, The Shining, into nightmare accommodation. Long, deserted and eerily quiet corridors will soon explode with the sound of doors being hacked down as a previously sane father attempts to decimate his family with an axe while demonic forces seen only by his young son, write strange messages in blood on the walls. Lonely halls in a murky establishment that is thankfully about to close make The Yankee Pedlar hotel from the movie, The Innkeepers a place to be avoided. Evil manifests here as sound as two employees at the establishment attempt to record the ghosts who have supposedly taken up residence.

The Pinewood Motel from the movie, Vacancy continues the classic horror pattern. A car breaks down and a couple are forced to book into a room that has hidden cameras galore and knife wielding psychopaths watching. Isolation is complete as no cell-phone towers exist. Horror Hotel features a young student doing research into witchcraft with similar results to Psycho. In all cases separation from the comfort of company is what makes these hotels the terrifying residences that they are.

Amy writes about movies and works for Deal Zippy – the hotel deals website.

One thought on “The Scariest Hotels From Movie History”